The balloon rocket is a great science experiment for kids to grasp the concept of force and energy. By involving in this activity, they also garner a lot of fun as it enables them to build their own balloon-powered rockets, something that is no less than an exciting toy.

On releasing the air contained in a fully blown balloon, it moves forward along a straight string to which it is attached. 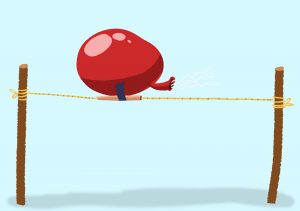 How to Make a Balloon Rocket: Video

Explanation of the Balloon Rocket Lab

On releasing the nozzle, the air that is stored inside the balloon at a high pressure rushes out in the backward direction with a lot of force because of relatively lower pressure outside. This is the action. Now According to Newton’s 3rd law of motion, every action has an equal and opposite reaction. As a result, the thrust caused by the backward movement of the air causes the balloon to go in the forward direction. According to Newton’s 2nd law, the thrust produced is directly proportional to the acceleration produced in the rocket and they occur in the same direction.

The same principle is utilized in rockets. A part of it is filled with fuel. On burning, it gives rise to smoke and gasses that rush out of its rear in the downward direction, causing a thrust on the rocket to gain upward momentum.

According to Newton’s 1st law of motion, a body continues to be in a state of rest or of motion unless acted upon by some externally impressed force to act otherwise. Note that the only resistance to the motion of the balloon rocket is air resistance and the friction on the string that causes it to stop eventually. In the absence of both these factors, its velocity would never be zero. This helps us to conclude that a balloon rocket can operate in space that is a vacuum. This fact applies to real rockets too that are sent to a planet’s orbit in outer space.

Do let us know of your observations and let us figure out the reasons for it.

Turn it into a fun game by allowing children to race against each other with their homemade balloon rockets. Help them with tips and tricks to make it faster. Even preschoolers can enjoy its working as a toy without having to delve much into the details. It is also an ideal project for demonstration at science fairs.