This easy science project is as good to be done with preschoolers and kindergarten kids, as with grown up children in the lab, or at science fairs. It is a great activity to make the concept of how plants get their nutrition from the soil clear to the young, ever-inquisitive chaps. Remind them to keep their worksheets ready before starting. 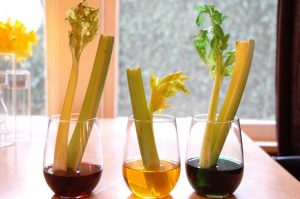 The leaves and trimmed ends of celery stalks get dyed when placed in colored water.

You will see that the leaves get a red tint. When you take the stalk out of the water you can watch small dots of red color at the trimmed end. You may rip the stalk open to observe a pronounced coloring effect. If you want, you can mark the initial level of water with a chalk and later you will find that the level has gone down.

Plants draw water and minerals from soil through the capillaries or tiny tubes in their stems known as xylem. This is known as capillary action that is nothing but the pulling of the water up to the leaves and other parts of a plant, just like you suck on a straw. Another important phenomenon that is responsible for the upward movement is osmosis due to which the dyed water enters the cells of the celery, giving rise to turgor pressure that eventually draws the liquid up. This action is facilitated by the transpiration (the slow, continuous loss of water from the leaves of a plant) of the water molecules that are already present in the leaves.

You can also try

Since the salt water is a hypertonic solution (less of water and more of salt), due to osmosis, the water from the celery cells passes on to the solution making the plant soft and mushy. On the other hand, the opposite happens in the second case making it rigid and stiff.

How to Build a Hovercraft