Dancing raisins is a practical demonstration of Archimedes’ principle in a fun and exciting way for kids. Teachers may even choose to introduce the project as a new biological organism named the ‘sewer lice’ to add to the fun and mystery. Later, the kids can figure that it is just a hoax as the black ‘living’ creatures are actually just a bunch of swimming raisins. 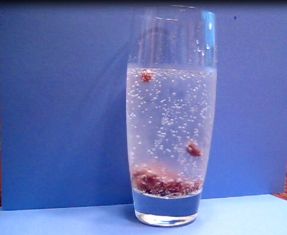 On being dropped in the soda water, raisins execute a bobbing motion giving an impression that the raisins are dancing. This continues for several minutes.

Things you can try

Explanation for the Sewer Lice

Since raisins have a rough surface, they attract the carbon dioxide bubbles released by the carbonated soft drinks. The surface areas of the raisins are thus increased resulting in a considerable increase in their volume but a negligible change in their mass. Thus, their density becomes less than that of the surrounding liquid and they are pushed up due to the increased buoyancy.

On reaching the surface, the bubbles pop, causing the raisins to go back to their original density. The resulting diminished buoyant force is not enough to keep the raisins floating, thus making them sink. The process repeats itself till the soda becomes flat or the raisins become soggy and too heavy to be raised up, whichever is earlier.

Vinegar and baking soda can chemically react to form carbon dioxide bubbles. Hence, the raisins will dance in a similar fashion as they did in the soda. 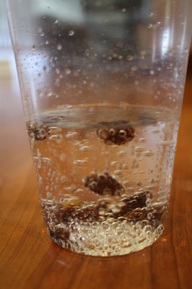 Alka-seltzer or fizzy lemonade is a good substitute for soda. As a lab activity, children can plot a graph with the time in seconds along the X-axis and the distance covered in cm. along the positive or negative Y-axis to signify the upward or downward movements. Whichever alternative way you try, it garners a lot of scientific curiosity in their young minds. It will surely be a hit as a science fair project.

How to Make Oobleck