When kids perform this simple experiment, it seems as if they are just having fun with milk, food color and dish soap. But, on close observation, it is clear that it is nothing but physics in action. The educative, along with the fun aspect of the tie-dye milk experiment makes it ideal for the little ones. 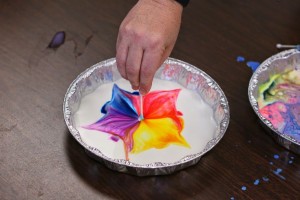 On touching the food color floating on the milk with detergent, the color would spread to the edge of the plate making a swirling motion. 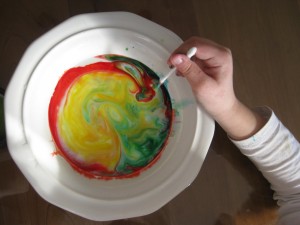 The principle at work here is surface tension. When you touch the milk without the soap, nothing happens.  The drops of food color, being less dense than milk, just sit on the surface where you placed them. Since you did not stir, they do not mix with each other much. But when you touch it with soap, the surface tension of the milk reduces. Soap molecules being bipolar, their hydrophilic (water loving) ends dissolve while the hydrophobic (water-hating) ends attach themselves to fat molecules, weakening the chemical bonds holding the latter together. Thus the fat gets dissolved. 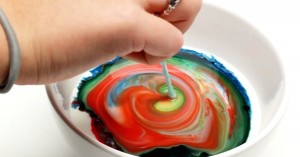 The milk surface outside the soap boundary having a higher surface tension pulls itself away from the original spot, dragging the food color along with it. The movement gives rise to convection, drawing the food color down before popping it up again to the surface, some distance away. It is pure fun to watch the soap molecules race around to join with those of fat as the latter twists, contorts, bends and rolls in all directions. The food color is also bumped and shoved around everywhere, in the process.

As the soap evenly mixes with the milk, the movement slows before stopping completely. The addition of another drop of soap starts the motion once again.

Whether children perform the trick in the lab or a science fair, they are sure to garner a lot of attention. They can also utilize the color explosion to do different patterns of milk art as well. At the onset, instruct them to refrain from drinking any of the colored milk as it contains detergent. After the experiment is over, they should simply pour it down the sink to prevent it from spilling here and there.

How to Make a Salt Crystal Garden