The purpose of the simple experimental setup described here is to demonstrate the electrolysis of water. Proper knowledge on the chemical composition of water will help school children achieve the aim of the project and comprehend the associated theory. 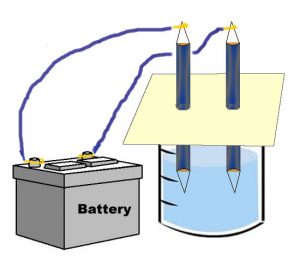 On passing electricity through water, it splits (or electrolyzes) to give off hydrogen and oxygen gases at the two electrodes.

[N.B. The pencils will play the role of the electrodes as the graphite in them conducts electricity but does not dissolve in water.]

[N.B. Instead of using the alligator clips you may strip off the insulation at the ends of two pieces of wires and wrap them around the graphite tips and the battery terminals to complete the circuit.]

Note down your observations. As soon as you finish with the connections, you will find bubbles forming around the tips of the pencils immersed in water and moving upwards until they reach the surface.

It happens because each molecule of water (chemical formula H2O) consists of 2 atoms of hydrogen and one of oxygen. When electricity is passed through it by means of the battery, the water gets split or decomposed into its gaseous constituents that are released in the form of bubbles at the electrodes (hydrogen collects at the pencil connected to the negative terminal and oxygen at the positive one). You will watch that the rate of bubbling is more for hydrogen than that of oxygen since the gases maintain a ratio of 2:1 in water respectively.

Water consists of hydrogen and oxygen.

The above fact can be confirmed by inverting small test tubes underwater over the pencils to collect the gases by the downward displacement of water. Now if you introduce a lighted wooden splinter into the gas collected at the cathode (hydrogen), it will make a popping sound. A glowing splinter introduced into the oxygen will, however, rekindle.

Kids can perform the activity easily at home or in the lab but under the guidance of an adult since the procedure involves electric current though in a very small amount. If done in the lab, attention has to be paid towards creating a proper lab report. When carried out in a science fair, that the experiment serves as a mechanism to extract hydrogen and oxygen from water can also be pointed out.

How to Build a Hovercraft